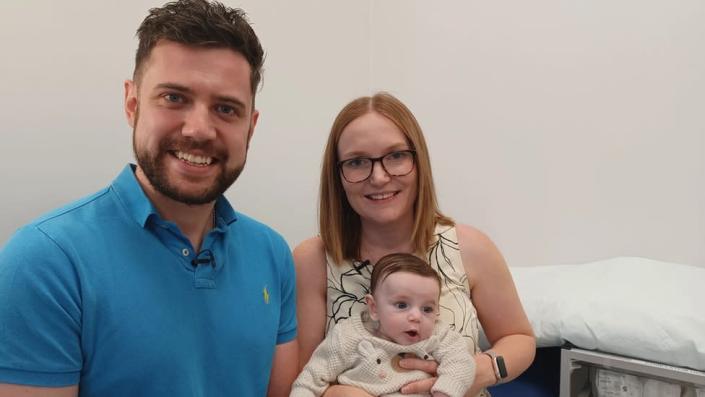 A newborn baby boy was saved from unnecessary chemotherapy when a special blood test revealed that a suspicious cancerous lump on his leg was actually benign.

The test, called whole genome sequencing (WGS), revealed the lump to be a rare mass called a myofibroma.

Recent advances in genetic testing technology mean that these types of tests have become faster, cheaper and more accurate, making them more widely available on the NHS.

New parents Sara and Michael Bell, from St Neots in Cambridgeshire, had spent the first eight weeks of their son Oliver’s life preparing for his chemotherapy and surgery.

They were told that he might need a feeding tube and lose his hair.

“Thoughts of all this consumed us. It changed our lives,” Sara said.

He said: “When we got the WGS result it was amazing. The scientist had looked at it over the weekend and emailed me right away.

“I had been waiting for cancer. I was so relieved.

“I would have hated giving Oliver treatment unnecessarily. It feels pretty hard to give kids chemotherapy when you know they definitely need it.”

What is your genome?

In Oliver’s case, the very complete readout was able to detect a very small and unusual error in the lump’s genetic code.

This not only confirmed that it was not cancer, but also suggested that the lump is likely to go away over time.

It’s already winding down, but Oliver will be closely monitored.

“We would not have been able to detect this with any other test, genetic or otherwise,” says Dr. Behjati.

He says that because WGS analyzes almost every part of the genetic code, unlike other routine genetic tests that focus on specific areas, he was able to expose the subtle and unusual change in the genome of the lump.

WGS has been routinely offered, through England’s NHS Genomic Medicine Service, to all children with suspected cancer in Cambridge since last year.

Dr. Behjati estimates that something unexpected turns up in about 5% of his young patients.

He says that WGS will be central to the work of the proposed new Cambridge Children’s Hospital.

The trial is in the process of being rolled out to the rest of England.

Professor Dame Sue Hill, Chief Scientist of the NHS for England, said: “The NHS is a world leader in offering whole genome sequencing as part of routine care.

“As part of this, all children with a suspected or confirmed diagnosis of cancer can be offered whole genome sequencing across the NHS in England.

“I’ve been able to see firsthand what this has meant for Oliver and his family, which is a powerful demonstration of the power of genomics to deliver real benefits for patients and their families.”

Oliver’s father, Michael, said: “We know we are very lucky to have that result.

“It was like a miracle, a miraculous test that told us that I didn’t have cancer and that we could go back to our normal lives.”

Image Source: POPSUGAR Photography / Matthew Kelly Topical spironolactone is a hormonal acne treatment. Treatment is similar to oral spironolactone but without some of the common...
Read more

What are you going to do without the Juul? Tell us your story.

Last month, the FDA ordered Juul off the US market, meaning the company had to remove its e-cigarettes from store...
Read more

Laura: That makes sense. If the US government wanted to make the food supply safer, are there measures they could implement?Helen: There is...
Read more