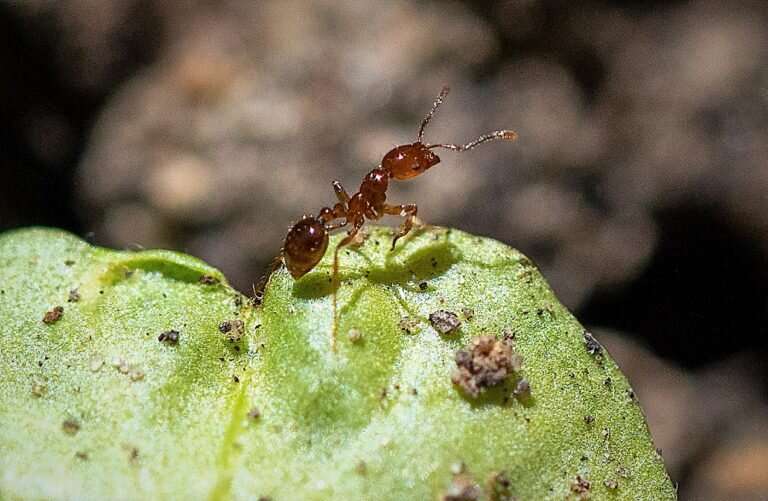 “Urbanization is a growing habitat around the world, and it is becoming increasingly important for organisms to evolve ways of living when their natural environments are disturbed,” Vargo said. “Studies like this look at important questions regarding this change, ‘Can they adapt to urban environments and how?'”

The environment influences the behavior of ants, chemical changes

The study focused on Tapinoma sessile, a relatively small species of ant commonly known as the house ant or sugar ant. It is the most common invasive house ant in the US.

In its native environment, the house ant creates small, single-queen colonies that are usually found under leaf litter, rocks and logs, Vargo said. But in suburban/urban settings, these house ants build ever-expanding, multi-queen colonies around man-made structures such as sidewalks, plant containers, and garden mulch.

Vargo said the study provides a wide range of scientific applications related to biological and behavioral change caused by environmental conditions throughout the animal kingdom. It could also provide insights into how invasive species interact with environments new to them.

“The change is very similar to that of invasive ants once they move from their native range to an invasive range,” he said. “The idea is to better understand this syndrome in an ant species that can take over a small, inconspicuous colony that then becomes an economic and ecological problem as the damaging colonies get larger and larger.”

The researchers used a large genetic database to identify chemical and behavioral changes that influenced the ants’ social organization, Vargo said. They explored and compared population genetics and reproductive structure within and between ants in various urban and undisturbed natural locations within their range.

Odorous house ants were observed and analyzed in natural and disturbed locations across the country, including Indiana, Arkansas, Colorado, and California.

The team looked at ant chemistry, such as hydrocarbons, the genetic makeup of colonies, and behaviors, such as aggression toward familiar and foreign ants, and found strong differences based on environment, Vargo said.

The study found that house ants in urban and natural areas showed adaptations that resulted in genetic concentration. Vargo said domestic queen ants in their natural habitat typically leave the colony in which they hatch, fly to another suitable location, and attempt to establish a new colony. The queens of urban colonies stay in the nest and expand the colony instead of leaving.

Also, polydomous colonies, which are spatially separate but socially connected colonies of ants, were only present in urban habitats, Vargo said. This suggests that house ants only create supercolonies in developed areas. Ants from different urban areas shared some genetic similarities, suggesting that they are adapting to characteristics that are common in the urban environment.

As a next step, the researchers plan to compare stable isotopes in ants to look at changes in diet and how they might relate to natural vs. urban environments and possible contributing factors, such as temperature and the urban heat island effect. .

Vargo said the researchers have hypotheses, but they don’t yet have data linking how and why the changes occurred.

The research was started by Blumenfeld, who was a doctoral student in Vargo’s lab and is now a postdoctoral researcher at Yale University. He said that he is interested in answering questions related to adaptive evolution in animals, regardless of their classification or species, and whether they are invasive or adaptive to human-caused disturbances, including cities.

“The study highlights the influence of urbanization on the evolutionary course of species,” he said. “It’s important for us to answer questions related to adaptive evolution, whether it’s an invasive species or a forest species that adapts to city environments.”

This document is subject to copyright. Other than any fair dealing for private study or research purposes, no part may be reproduced without written permission. The content is provided for informational purposes only.

When President Biden signed the $1.2 trillion Bipartisan Infrastructure Package into law last November, many saw it as a Opportunity...
Read more

How Eric Adams Can Boost Black Male Turnout for Democrats

Democratic Party leaders are sounding alarm bells about a growing disconnect with black men. The estrangement has been evident in Stacey Abrams' high-profile...
Read more