The hypocrisy of the anti-vaccine patriot 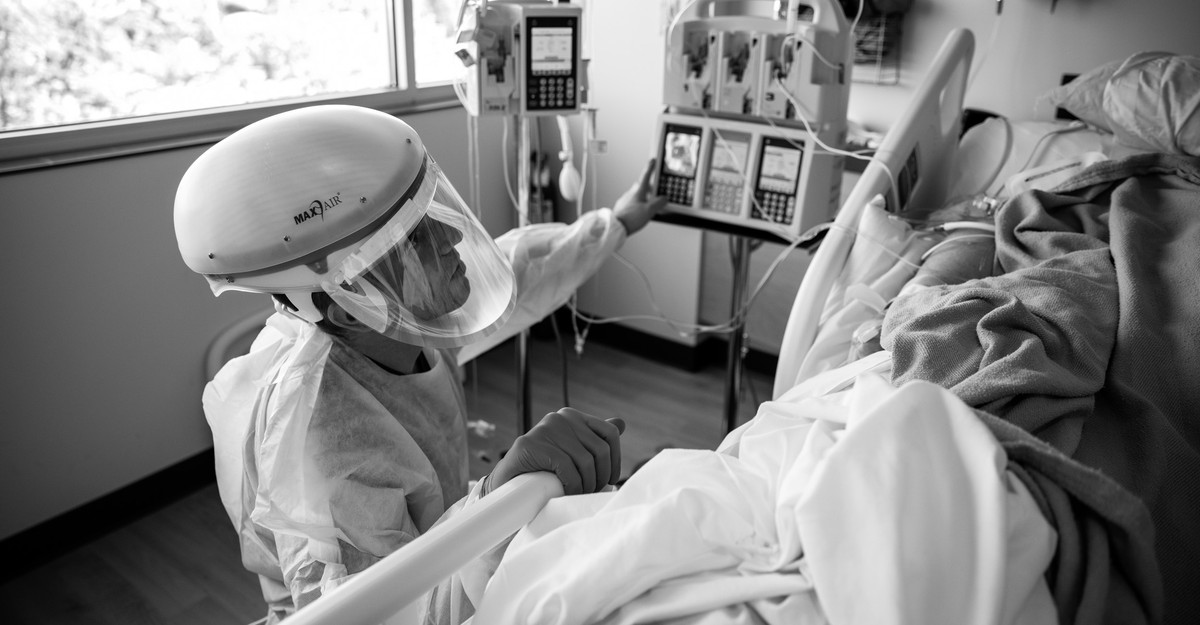 Molly didn’t feel particularly patriotic when she said goodbye to her husband, a Navy doctor, early one September morning. She was leaving on her second deployment in nine months, with only four days’ notice (she had received only 36 hours’ notice prior to her previous operation). And while her initial mission had been to the Middle East, on an aircraft carrier as an intensive care medic in the event of a COVID-19 outbreak on board, she was this time deploying within the continental United States to support a hospital that was overwhelmed. with unvaccinated COVID patients.

The pandemic had been raging in the United States for almost a year and a half. She was leaving behind five children, including her 10-month-old daughter, at a time when it was particularly difficult to get support for parents. “The civilian world is asking a lot of the military world right now,” Molly sighed. “And… really, it’s hard.” (I agreed to withhold Molly’s last name and those of several other military spouses in this story, because the military discourages service members and their families from discussing their deployments with the public.)

Molly’s husband is one of 4,700 military medical personnel who have deployed to help with COVID since March 2020 (another 5,100 have deployed to help with vaccination efforts). They are doctors, nurses, respiratory therapists, and administrative workers, and have performed at 81 hospitals in 60 cities, in 19 states, and on the Navajo Nation. My husband is training to join them. As an internal medicine resident at a Navy installation, he won’t be eligible to deploy until 2023 at the earliest, but these days he’s in frequent close contact with contagious COVID patients. His colleagues are equally exposed, especially hospital nurses and treating physicians. We have spent the last 18 months watching our friends work incredibly hard at home, only to see many of them sent away as the coronavirus spirals out of control in areas with low vaccination rates. It’s hard to shake the feeling that by refusing to do something as simple as get shot, people are taking advantage of the altruism of the military community. Families like Molly’s and mine want to serve our country and care for people in need. But deployments to help people who have chosen not to help themselves or their communities, while also claiming to be patriotic, can leave us feeling conflicted.

Molly’s husband’s first COVID deployment, early in the pandemic, “had a very patriotic feel to it,” she told me. He was going to serve his country, to face an imminent common enemy with the feeling that we were all in this together. But since then, vaccines have become widely available, and many of the most overwhelmed hospitals are now being filled out by those who have chosen to forego vaccination weather less than 66 percent of the US population is fully vaccinated. “I don’t completely blame” unvaccinated people, Molly said, “because I think there’s a lot of misinformation out there.” Military doctors and their families “answer the call when it comes.” And yet, this time, her husband isn’t focused on protecting his fellow soldiers or leading a charge into the unknown. He is being sent away from his family, his friends, and his own patients to assist in a mission fueled in part by a blatant reject your experience. “People say, especially a lot of conservatives say, ‘Oh, we support our military,'” Molly said. “They wave their flags. They wear red, white and blue. But then what are they doing to help [stop] the… spread of this disease?

“I vividly remember the moment he told me” he was relocating, Jennifer, a former Army wife, says of her husband’s COVID mission. He had been home from his previous deployment for only 18 months, and she had just made her daughter trust her to come home after running. “Of course, I got upset and cried,” she told me. But she was also sure that he was the perfect person for the job. His family had already been ill with the virus, and his specialty as a nephrologist made him a valuable asset in treating this particular disease. Still, the goodbye was hard and the deployment did not have a clear end date. It was the beginning of the pandemic and Jennifer had two children at home, but without the typical support systems. No family visits or babysitters or special activities. The kids got clingier, “which is fair,” she said, “but not being able to shower on my own… My escape was putting [them] to bed and then just watching Netflix.” When she recalls that moment, “I definitely don’t feel like I’m a victim,” she said. “I definitely supported all of her deployments. But I can’t lie… It’s a sacrifice for the family.” Earlier this year, Jennifer’s husband left the military. “No deployment was a plus,” she said.

Captain Tracy Koblinski, nurse and individual ready reservist in the Air Force, he has traveled to six hospitals in 19 months to support COVID relief efforts. People will “say around, ‘Well, you chose'” to become a nurse and join the army, Tracy told me. “’That was your choice.’ and it’s like But if I didn’t choose to do it, and you surely didn’t, who would be there to help?The lack of respect and understanding towards his sacrifice and that of his companions has called his attention. For one thing, “you don’t have a normal life,” he said: no family, no pets, no sleeping in your own bed (many deployed health workers spend several months living alone in hotels). And many things in life happen only once: people get married, babies are born, you miss graduations, anniversaries, recitals and games. Your children learn to walk. Older generations die. And those waiting for the deployed to finally return home — partners, children, colleagues, extended families — are forced to manage life alone during a pandemic. So when people say things like, “Hey, I’m a patriot, but it’s not my job to go and [get vaccinated] although I support the military,” Koblinski said, “they say one thing, but the actions show the opposite.” The fact that so many Americans refuse to get vaccinated it’s “making the job that much harder for us,” he added.

Chaplain (Capt.) Scott Edwards of the Mississippi National Guard has provided emotional and spiritual support to military preparedness teams in Tupelo, mentoring Soldiers, helping them find religious leaders and speaking out. And despite the fact that North Mississippi Medical Center has some of the best resources and facilities in the state, Edwards described soldiers experiencing stress levels from the Iraq War. “The reality is that a lot of these COVID patients that come into the room, they don’t leave,” he told me. Witnessing that level of pain and loss is deeply painful. And while typical doctors and nurses would have strong ties with their colleagues to support them through tough days, “our active duty component, well, they’ve only been there for a couple of weeks or a couple of months,” Chaplain (Major) Caleb Clark from the 172nd Airlift Wing, also in Mississippi, he explained. “They don’t have those relationships.” People like Edwards and Clark, who are working hard to maintain morale and offer guidance, are “carrying a huge load on a lot of people, all the time,” Clark said.

Despite what is being asked of them, and despite the pressure and anguish, everyone I spoke to for this story said some version of the following: We chose this path, we joined this fight. We love our country and we are ready to help. Chaplains and mental health providers step in to ease the burden on providers, just as providers step in to ease the burden on patients. “Yeah, we’re tired,” Clark said, “but we’re going to keep running toward the fire. That’s what we want to do.”

“People who buy military service do so because we live in a society where we care about each other,” Molly reminded me. I wish the civilian world felt the same way about us.

US defense chief visits Hawaii amid mistrust over fuel spill

Cash-strapped Americans have been relieved by falling gasoline prices in recent weeks, but not Californians. The average price of gasoline in the Golden...
Read more

NASA has added two astronauts to the launch of the agency's Boeing Starliner-1 to the International Space Station, the spacecraft's first mission after completing...
Read more

Jupiter's moon Europa might have one of the best chances of supporting life in our solar...
Read more
Load more

Fujifilm X-H2S review: The most powerful APS-C camera yet

introduction Four years after launching the X-H1, Fujifilm finally followed it up with not just one, but two models. One is the highest resolution...
Read more

COVID-19 hit public transportation employees disproportionately harder than other workers, according to a new study by California health officials. The study, led by the...
Read more

NASA has added two astronauts to the launch of the agency's Boeing Starliner-1 to the International Space Station, the spacecraft's first mission after completing...
Read more